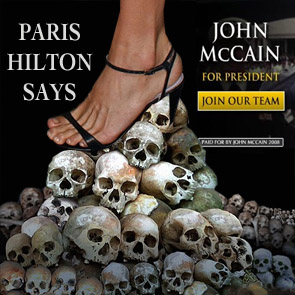 Kathy Hilton was on hand to pimp her loose daughter out and was on the set barking instructions to all and sundry.

“The premise of the whole video is that Paris gets her huge feet out and crushes the skulls of Obama supporters. McCain is actually funded by the Hilton’s, and they provided $35,000 in contributions so that their herpes laden daughter can feature in one of the ads. We added Obama into the shot under the skulls of his followers with CGI and the final effect is amazing,” Luke Miromar, the director for the shoot told the Daily Squib.

According to the video’s producer it usually takes five people to give Paris Hilton a foot rub utilising about 12 gallons of linseed oil. Paris insisted on having foot rubs every 20 minutes during the shoot which proved exhausting for all the crew.

Paris Hilton’s enormous feet are also insured for $25,000 each and whilst on set, the crew had to be very careful where they trod.

Paris Hilton is the symbol of the Neocons and has been firmly adopted as their mascot.

“In the age of Neocon waste, hatred, greed, ignorance and stupidity, Paris Hilton epitomises the Neocon-ite wasteland plaguing America with its lies and thievery. She represents what is wrong in this world and her ugly size 14 feet encapsulate the grotesque nature of Neocon America. She is the spirit of McCain,” a producer for the show revealed to us.

Filming of the McCain advert was beset with many problems. Every bunion on Paris’ enormous pods oozed a stench that had many in the film crew gagging. Filming was a tortuous affair and more smelling salts were ordered up by the director.

“She’s the only girl I know who has zits on her feet. I squeezed one of those babies and the pus hit our key grip straight in the fucking eye!” a distraught camera assistant recalled.

The McCain campaign team headed up by their latest secret weapon. Steve “The Prolapse” Scheisse, is not pulling out any stops in the offensive play against team Obama.

With Paris Hilton’s oversized smelly foot on their side, they are sure to put the boot in pretty soon.