GRANDmothers continues Anna Radchenko’s body of work encouraging us to ask: “What if?” The project plays with the idea that we will eventually be able to have children later in life, to the extent where even as grandparents we will have the choice to become pregnant. Composed of a set of photographs and a short film, GRANDmothers stands as a humorous visual commentary on society’s pressure to become a mother by a certain age in order to still be considered valuable.

Featuring a cast of older models, GRANDmothers isn’t the first project in which Radchenko has addressed the issue of ageism in contemporary culture. Drawing inspiration from her own mother, Radchenko began exploring the topic with her 2017 fashion film Silver Goddesses in which she celebrated the beauty and spirit of getting older. GRANDmothers represents a continuation of this discourse by presenting creative, active, pregnant women who simply happen to be older.

As in Radchenko’s previous productions there is a strong fashion element in her latest project. GRANDmothers features a selection of up-and-coming and established international designers with a strong focus on Russian labels, such as Outlaw Moscow, Roma Uvarov Design and Fakbyfak. Seeing fashion as a way to express one’s creativity, she highlights how age should not be a constraint when choosing what to wear. Radchenko engages with the viewers’ perception through an aesthetic of opposition. From the styling and production design to the make-up and hair, GRANDmothers challenges our own bias by having us reassess our expectations of what is beautiful, youthful and empowering.

Shot in Russia in what used to be one of the leading gynaecological hospitals in the country, the 1911 Hospital has been unused since 2013. The location also plays with our perception, combining the new with the old. Channelling a strong post-soviet aesthetic, we find pop band posters hanging on the wall, as well as Russian propaganda prints praising the traditional family. The result is an apparent eclectic ensemble, aimed at challenging what we know and take for granted, while leaving us wondering about what would happen if we stopped adhering to social norms and acting according to society’s expectations. 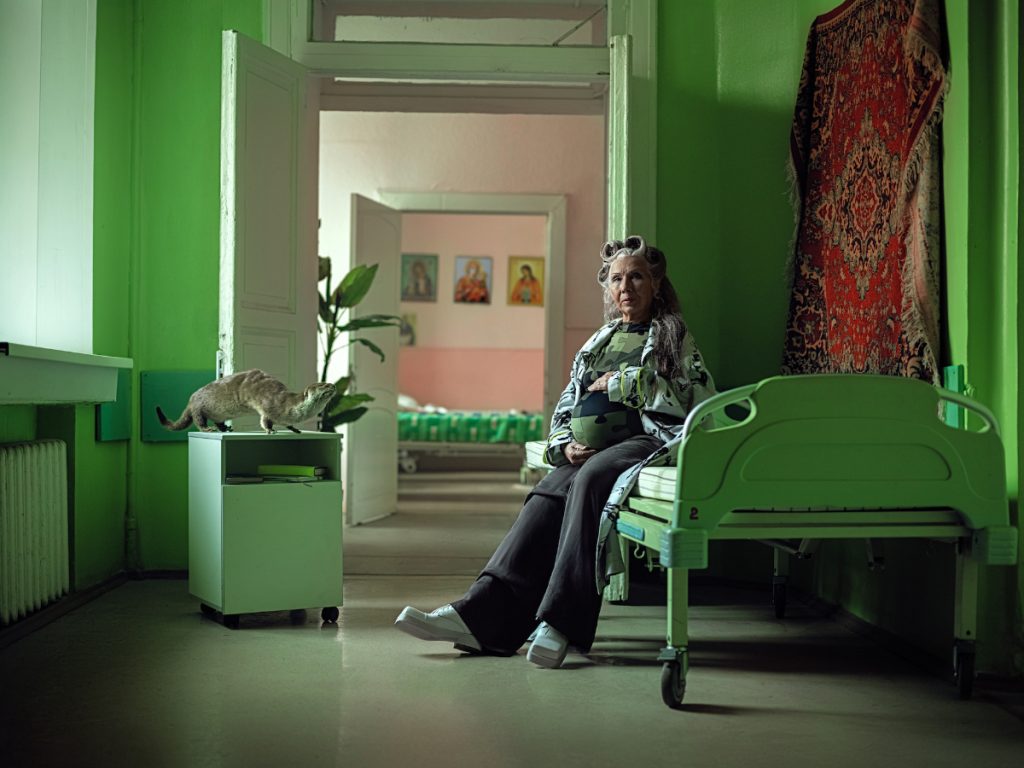 DS Editor Aur Esenbel:  Your latest video presentation entitled GRANDmothers portrays an old Soviet look yet with modern styling, mixing the grotesque with elements of beauty as well as kitsch. What is the ultimate message you are projecting and why?

Anna Radchenko: I simply wanted to play with our perceptions. We assume that beauty has to fit certain parameters. Equally, as we get older we are also supposed to act and dress in a certain way. I wanted to turn that round and portray a less glamorous and polished version of what we see in the media. It’s a reminder that we don’t need to sugar coat getting older and that it can still be beautiful and light-hearted regardless. It should be up how we decide to age, without any judgment from others.

AE: Your art seems to encapsulate a sort of dystopian post-modern idealistic outlook enmeshed with fashionable models, where the brutalist imagery meets the desirable. Would you say as an artist you enjoy exploring duality in all things?

AR:The main thing that I ask myself is, what if? In all my work, that’s the question I focus on. For example, behind the idea of my experimental video Kokosmos I asked myself what if we were just pawns in the hands of space goddesses having fun. Similarly, with my fashion film Detour, I asked myself what if hair became conscious and started taking over the world? I generally enjoy working with our expectations, almost as a reminder that the way we see and accept things is only one possibility.

AE: Post communist Russia has undergone changes. What would you say has been the change in creativity in Russia since the collapse of the Soviet era?

AR: Since the Soviet Union has come to an end, artists have been able to look into themselves. Before it was more about glorifying how great we were as a unit. Now we are able and free to question ourselves and reflect over who we are as human beings, as individuals.

AE: Your personal site www.annaradchenko.com also has a link to your creative production school. Please tell us about the school and what someone could gain from joining one of your courses?

AR: This is an online academy for emerging creatives that I set up in 2018. It’s something I started because I kept on being asked for advice online and realised that there was a need for something more tangible than what you may be taught in a more academic environment. One part is focused on building a strong portfolio (generating ideas, preparing treatments, noticing trends etc) and the other part looks at PR, funding and commercial work (working with brands, getting represented by an agency, signing contracts, etc.) What I’m offering is a very hands on experience where you get to attend masterclasses and courses run by professionals who are making content and are currently working in the creative sphere.

AE: Minimalism, dystopia, life, death, beauty, are all elements in your videos. What is the basic process of making one these videos, from inception to production, casting, 3D artists, post-production, the moulding of technique and imagination?

AR: No two works are the same, especially as more than a director or photographer I consider myself a multidisciplinary artist. I enjoy working across different mediums, so whenever I come up with an idea I think about what’s the best way to bring it to life. Then I look for people in my network who are specialists in their fields and the rest is making sure that we stay on track with my creative vision. Recently I’ve definitely started experimenting more with VFX, as I think there’s so much potential with this tool. But it’s a learning curve and with every project  I refine my skills and push things a little further.

AE: Who are your favourite artists?

AE: Please tell us about any future projects you may have coming up?

AR: I’ve just finished a video focused on the passing of time. It’s something between a fashion film and an experimental piece, in which we want to show how time is something that is constantly around us, albeit impossible to control. I will definitely make sure to share it with you once it’s out!

AE: Cпасибо, it has been a pleasure and honour to gain an insight into a fellow creative artist. Looking forward to your next artistic birthing. 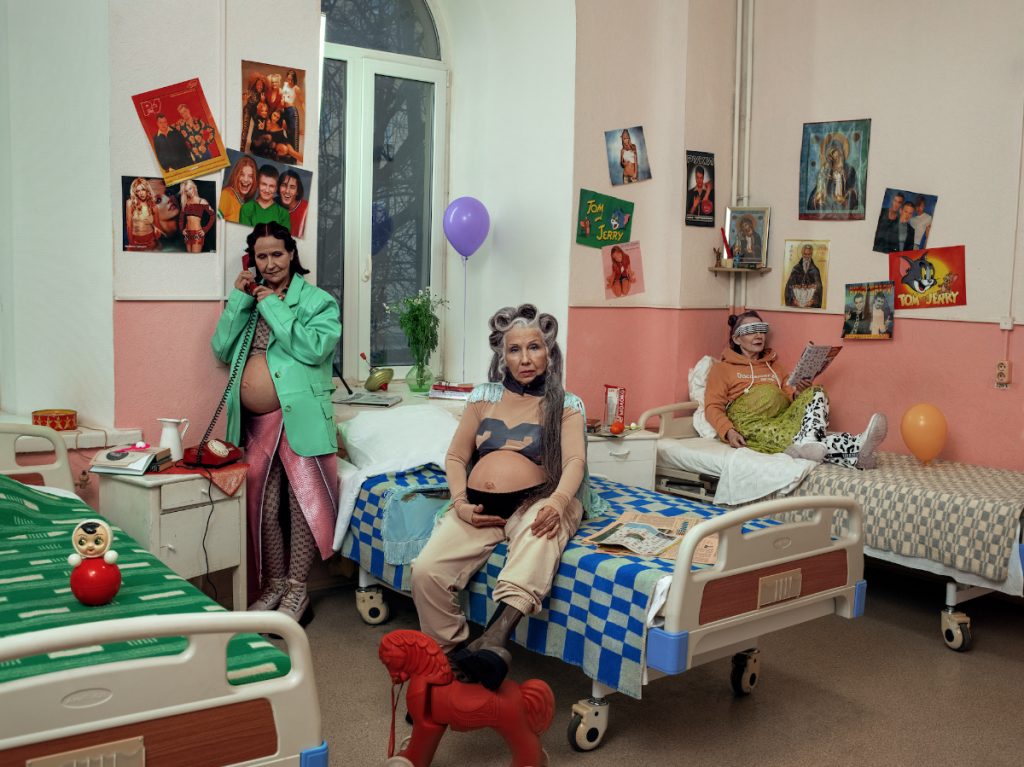 “I was thirty years old when I became a mother. This made me think about how in the USSR I would have been referred to as an “Old Mother” on my medical card. Which is crazy when you think about it. Childless women over the age of forty or fifty are often seen as purposeless, and they are encouraged to embrace a more sedentary lifestyle. On the other hand, men are perceived as getting better with age. This mindset is particularly true to Russia, though still very much present all over the world.

GRANDMothers is a reflection on this. It holds an element of criticism, but it’s also a positive reminder of how far we’ve come in terms of being able to make our choices. By having projects such as GRANDmothers published and shared online, I want to make a difference in shifting our mindset and allowing us to perceive ageing as something as valuable for women, as it is for men.”

Anna Radchenko is an award-winning director and multidisciplinary artist from Moscow, who now lives in London. She specialises in music videos, commercials, mixed media editorial projects and art installations. Graduating with a distinction in MA Fashion Photography from London College of Fashion, Radchenko’s films have been selected by some of the world’s major fashion and short film festivals including Berlin Commercial, Underwire, Aesthetica and LA Fashion Festival. Her vision is grounded in employing surreal ideas to create content that is both optically arresting and memorable. Anna is represented by Kode Media in the UK.