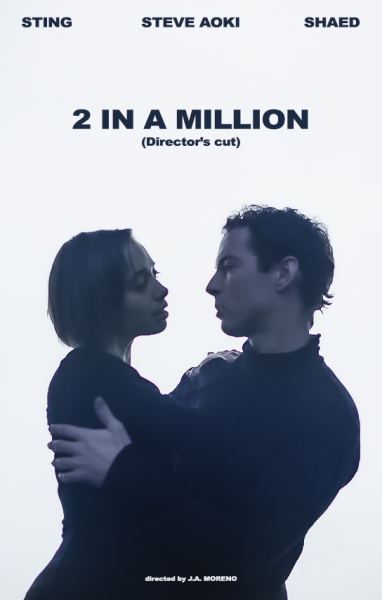 The video follows two dancers in one long shot, as they relay the feeling of falling in love and being soulmates.

Filmed in just thirty minutes at the end of the official shoot, Moreno’s cut focuses on the dancers, seen only as silhouettes in the official version, and highlights their outstanding technical skills and chemistry.

2 in a Million is the third collaboration with Steve Aoki. Commenting on it, Moreno states:

“Working on this project was a dream. I had already worked on several projects with Steve Aoki, so I knew that we got on well. With 2 in a Million he gave me the chance to do what I love for a music legend like Sting”.

Though just 26 years old, the Spanish LA-based director has worked with some of the top names in the entertainment industry, including Paris Hilton, Andrés Calamaro and will.i.am. with his work being selected internationally at events such as MTV Dance Australia, Soundie Music Video Awards, Berlin Commercial and Aesthetica Short Film Festival.

“I was so inspired both by the energy of the dancers as well as the location – the United Palace theatre in New York. It was challenging, as we had to do everything in just thirty minutes (hence why the long shot), but it’s rare to have time to spare at the end of a shoot. I just had to do it.”